Our best estimates of the parameters of the explosion on 1 February 2003 are as follows:

Southern Methodist University seismologists Gene Herrin and Petru Negraru analyze the infrasound signals from the TXAR and NVAR arrays of the re-entry of the Space Shuttle Columbia, 01 February, 2003.

A sign on the 635 expressway in Dallas on the afternoon of February 1st, 2003, alerting the public to the presence of shuttle debris. Eric Yundt took some pictures.

National Weather Service radar got clear images of the path of the debris. Ed Okerson assembled the images into a gif animation.

Dr. Herrin describes the analysis of the infrasound signals and our conclusions concerning the disintegration of the Columbia, at a press conference 14 February 2003.

Here are infrasound records from the NVAR array in Mina, Nevada, and the TXAR array in Lajitas, Texas, of the re-entry of the Space Shuttle Columbia on 01 February, 2003.

The above image shows the sound pressure wave, what seismologists call the 'N' wave, better known as a "sonic boom," as the shuttle passed over the array at Mina, Nevada. The signal was recorded at about 13:58 GMT. Full resolution versions of the image are available for download. Here (852k) is a TIF file, and Here (51k) is a GIF file.

Compare this image with the sound pressure N-wave below, recorded 21 February 1997 as the STS-82 shuttle mission passed over the TXAR array. There appears to be some unusual unexplained high frequency content in the Columbia's signal, as contrasted with the comparatively clean 'N' signature of the STS-82 recording.

The following data were recorded by the TXAR array, about 500 miles south of Dallas, as the Columbia passed over north Texas. The N-wave is not seen from a passage at distances greater than about 100 miles.

The signal was recorded at about 14:30 GMT. It shows a gradual ramp up of signal followed by a series of sharp events that appear to be explosions, somewhere between 7 and 12 separate events, with one widely spaced small event near the end. It took the sound wave about 30 minutes to arrive at the infrasound array in Lajitas, Texas. Best estimate of real-time for the first large peak is 13:59, within a minute of when NASA lost the telemetry signal. Here (872k) is a TIF file, and Here (123k) is a GIF file.

Calculation of the azimuth (angle to the source) of the peaks of the signal recorded at TXAR by the SMU team show that, though the peaks are spread across about 11 minutes, during which time the shuttle would have traversed a few thousand kilometers, the azimuths all came from the same direction, within plus or minus one degree. This indicates to the seismologists that these are not separate explosions, but rather multiple paths, more properly 'refractions,' of a single explosive event. That event appears to have occurred at about 13:59 over west Texas between Lubbock and Amarillo, at an altitude of about 62 kilometers.

Previous simulations of infrasound signals done by researchers at the Los Alamos National Laboratory ("Modeling Study of Infrasonic Detection of 1 kT Atmospheric Blast" by K.A. Dighe, R.W.Whitaker, and W.T.Armstrong) of the stratospheric and thermospheric infrasonic returns from a single explosion show striking similarity to the multi-peak infrasound signals recorded for the breakup of the Columbia at TXAR. SMU analysts compute the signals as most likely a single decompressive event.

The above image is from a model generated by researchers at SMU of the infrasound signal that would be recorded at the TXAR array for a small explosion with the parameters calculated for the 1 February 2003 event, including the stratospheric and thermospheric infrasonic returns. A high-resolution version is available as a TIF (4.3M) image.

On the morning of 7 July 1996 shuttle mission STS-78 passed over north Texas on a course very similar to that taken by the Columbia on 1 February 2003. Although TXAR is too far away to record the N wave from that passage, signals recorded by infrasound instruments at the TXAR array that morning have been interpreted by seismologists as acoustic waves generated by the N-wave from the STS-78 shuttle passage.

These signals are similar to the signals recorded for the Columbia, but without the unusual sharp peaks. The infrasound data from the Columbia mission appear to be a superimposition of similar N-wave induced acoustic signals, plus the sharp arrivals from an explosive event as modeled in the simulations. High-resolution versions of the STS-78 signals are available for download as JPEG (1.1M) and TIF (5.M) images.

The image below is a recording (courtesy of Geotech) of the shockwave from the space shuttle Columbia recorded at Dallas. This is the signal that was heard by residents of Dallas and North Texas on the morning of 01 February 2003. The seismologists have determined that it is composed of multiple 'N' waves, sonic booms, created by the re-entry of multiple pieces of shuttle debris after the breakup of the Columbia. The Geotech website includes additional infrasound signals of these multiple N-waves. 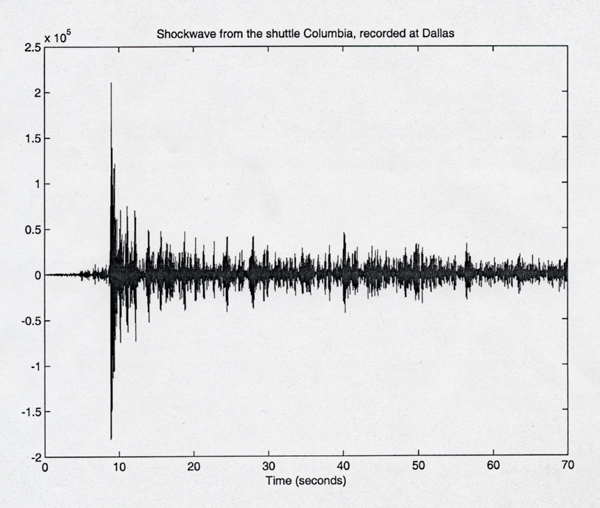 Below, Dr. Chris Hayward answers questions about the seismology and infrasound research programs at Southern Methodist University. Ellen Mayou of SMU News and Information is surrounded by cameras and reporters at the press conference on Friday morning 14 February 2003.

Here are 300 dpi tiff images of the azimuth and trajectory (12 Mb) of the Columbia, and of the infrasound signals (8Mb) of the Columbia compared to the earlier flight. You can do a right click and a "save link as" to download these images.